A Voice From The Past

A long-time friend of mine called from Nebraska yesterday. His name is Jerry Smith and nope, we’re not related. We met in our 7th Grade Home Room in 1967 at Barr Junior High since they put us in there by alphabetical order in those days. Jerry is a little bit shorter than I am so we had all kinds of nick names like “Mutt and Jeff“, “Smith Brothers” as in cough drops and a few others. Jerry still lives in Grand Island with his family. He’s a great friend and it’s good that we can stay in touch.

Later in the day, I got another email message from another old friend from high school in Hastings, Nebraska. The individual found my weblog and gave me a little grief about looking a whole lot older than the last time they saw me, which was a long time ago. On a dare to post something nostalgic, I found this news item from the Hastings, Nebraska Tribune. So here it is. I’m not sure of the date of the news photo but I wrote May 4th and 5th on the photo and yes, that would be 1973. My U.K. viewers may be interested in knowing the setting of this 1935 drama, “Kind Lady” was set in London. I played the part of an English butler, and as you know, the butler was usually behind the shady antics of the plot. This was no exception. 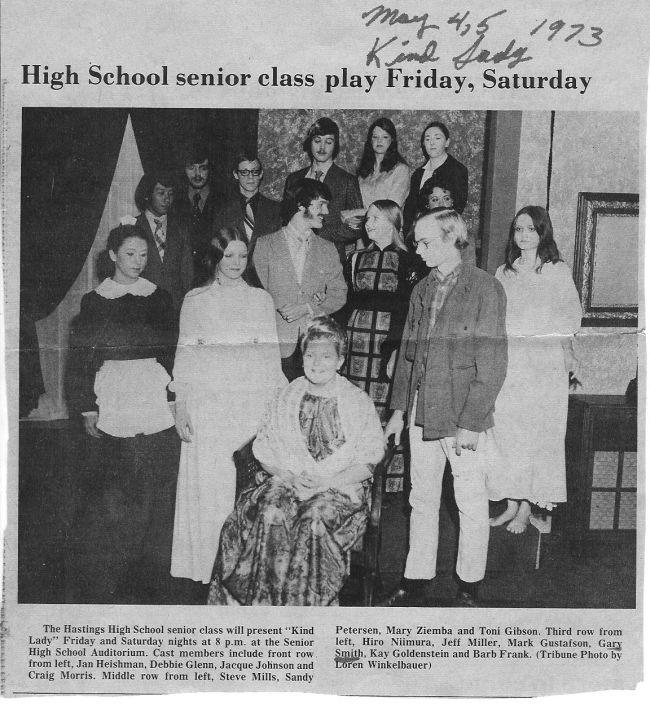